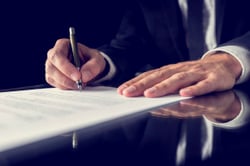 Always confirm in writing all named insureds to a policy, even on renewal policies. Often we tend to take for granted that information in our files is accurate relating to who is and who is not insured under an insurance policy. Companies renew or auto renew policies without re-verifying information regarding the insured. Most insureds don’t realize the details of their policies that might have certain requirements regarding change in control, adding or subtracting entities or in the definition of who is covered under a policy.

I have highlighted below several issues that often lead to claims against our insurance agents and brokers which could have been avoided by simply confirming the named, additional named and additional insureds on a policy.

During the policy year, a father transfers ownership of his company to his son or daughter. Believing that nothing really has happened, he doesn’t notify his carrier and in filling out the application, he lists that there have been no changes in ownership. In fact his policies have specific wording that the policy is paid up upon transfer of ownership. If it is a claims made policy, he has a limited time period to purchase a tail policy and there simply is no coverage at renewal.

During the policy period the insured forms a new company to handle a specific segment of his business. The client refers to this entity as a subsidiary when in fact it is a related company with the exact same ownership. The broker doesn’t ask the specific ownership of the new company. In this case the new company does not meet the definition of a subsidiary in its policies since it is not owned by the named insured. When it is discovered at renewal, the new entity is added retro inception without any prior acts coverage since it was not covered previously leaving a gap in coverage.

During the policy period, the insured purchases another operating entity. This new company does the same thing as the current company but represents an increase of 25% of the revenue of the current insured. Since this company exceeds the acquisition threshold in the current policy, no coverage is afforded for this entity until it is underwritten and the cost of this coverage was not contemplated in the acquisition.

The insured moves coverage from one carrier to another. This insured had an endorsement which listed several named insureds for prior acts coverage that the insured no longer owns. The new policy doesn’t list them since they are no longer part of the company. In fact, the company had a contract in place that required that coverage be provided for these entities for 3 years after the sale of the entities. This leaves a gap in coverage for the new broker to be exposed.

We recently received a request from a client to remove three entities from the named insured schedule since they have not owned them for at least three years. The request was a mundane request to one of our account managers. Upon review of the file on this claims made policy, there was another endorsement that limited coverage to only wrongful acts prior to a certain date (forward acts endorsement). Although, the request seemed reasonable to the client, understanding why we have such endorsements on a policy and confirming our files and with the client, we did not remove the entities. That could have left the client uncovered for prior wrongful acts.

Incorrect named insured and additional named insureds represents the top 5 of our insurance agents and broker claims issues. It is very important that upon renewal, and periodically during the year, that you confirm with clients any changes in operations, ownership or entities and that this confirmation is in writing for your records. Always confirm in writing all named insureds to a policy even on renewal policies.