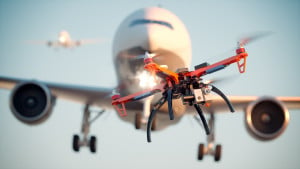 With the rise of the use of drones, the need to establish where they can fly has become an increasing concern. The FAA has received requests for waivers in regards to allowing drones to fly in certain airspace and due to the fact they were either poorly worded or are regarding airspace that isn't yet being processed are being denied. This is because of how the FAA defines the airspace in the United States.

In the U.S. there are generally six classifications of airspace ranging from Class A to Class G. Depending on the class, the flight restrictions for aircraft and the protocols for airports change. Class A is defined as anything above 18,000 feet above sea level, where jets fly above the clouds. This classification lasts all across the U.S up to its designated nautical boundary. Class B concerns the biggest and busiest airports in the country, like New York and Atlanta and can go up to 10,000 feet above the control tower’s elevation.1 Classes C to E are the ones that have drone operator’s attentions as these typically fall into smaller market airports or even municipal airports. The airports need a control tower but the pilots, including drone operators, don’t need a pilot certification but the relevant control towers would need to be aware and they could not impact flight operations. It is these waivers that the FAA has been looking at to give them the ability to fly in these classes of airspace. As for Class G, they have said there is no need for a waiver. This is due to the fact that Class G refers to any airspace not controlled by a tower such as out in the Great Plains or in the desert. Thus the only restrictions are the ones they have outlined previously.2

As of this writing, the FAA is considering applications for Classes E-B, with Class C becoming available on November 1st and class B on December 6th. Any applications that came in before those dates will be rejected. Despite the availability of wavers, the rules concerning the use of drones remain the same. An operator must have a remote operator license to operate the drone. The visual rules from the old regulations are still in effect, in that you need to stay within eyesight of it, and not fly it above 400 ft. In addition, unless you have a special permit for night flying and the proper equipment, drone flying is suspended 30 minutes prior to sunset and 30 minutes after sunrise and said drone cannot exceed 55 pounds.

Despite the increasing amount of airspace available to drone users, the insurance needs remain the same for all operators. Aviation insurance is not covered under part A of the standard general liability policy, meaning you need a commercial aviation insurance policy to cover the operators and have your G/L policy specifically endorsed to cover the exposure otherwise they would be looking at significant exposure.