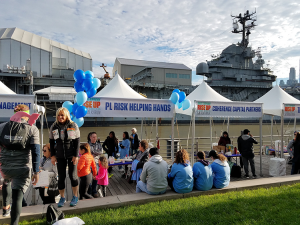 On October 14th, PL Risk Helping Hands participated in the New York Shatterproof Rise Against Addiction 5k Walk/Run event. The team helped raise over $15,000 towards helping to bring the stigma of addiction to the light, one of the largest team contributions of the over $600,000 that the participants for the event brought in.

Participating in this walk were PL Risk Helping Hands team members Christine DeFelice, Joan Pandorf, Drew Smith, Dylan Kelly and CEO of PL Risk Mike Smith. Their family and friends also joined in on the event. Christine DeFelice, who is the team leader, felt emotional about the cause. “So many people have died to drug overdoses and yet they are forced to hide their problems. This group’s mission is to bring that into the light through helping the families and pushing for legislation to help first responders save people’s lives.”

Shatterproof is an organization that combats the fallout of those affected by drug addiction, especially opioids. On average, 174 Americans die from overdose every day and 65,000 die every year because of drug abuse. To put that number in perspective, the Vietnam War, over the 9 years the U.S was in the country killed over 58,000 servicemen. The CDC has classified this crisis as an epidemic. Shatterproof helps individuals and families affected. They also raise awareness in the community and in the legislatures.