Use of Commercial Drones - E&O Tip of the Week 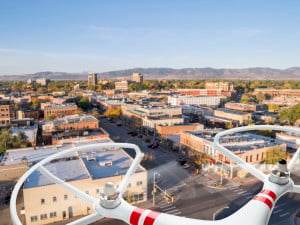 As technology makes its steady progress onward, an invention made for the military has made some people worry about privacy and security. Some real estate brokers, in an effort to reduce costs and be more competitive, have started to use drones with mounted cameras to take pictures and even map out property they represent. However, many run the risk of breaking the law and creating increased liability.

First, they need to apply for an FAA exemption. As of August 4th, 2015 the FAA has only approved a little over a thousand such exemptions, mostly in motion picture and infrastructure. Only a handful of real estate brokers have this exemption.1 This exemption allows drone operators to operate below 500 feet*, outside of restricted airspace. Second, the drone must be operated by an individual with a current pilot’s license, which includes proper training and a valid medical license. Third, is you must have an observer on the ground and both pilot and observer must stay in visual range of the drone.2

The above requires only minimum qualifications to operate a drone. Next, you must evaluate the rules associated with operating a commercial drone. Since the use of a commercial drone qualifies as a commercial aviation, a standard general liability policy will not cover any of the liability costs associated with operating a drone. An operator must get a commercial aviation policy in order to cover such risks. Additionally, the use of drones itself leads to privacy concerns. In Kentucky, a man was arrested and charged with criminal mischief and wanton endangerment, after he shot a drone down that he claimed was invading the privacy of his home and his family. This highlights that privacy is a big issue concerning drones.3

The other issue is that these drones, while they are out taking pictures, could be interfering with things like flight paths and EMS services. In the middle of fighting the wildfires in California, helicopters carrying crucial water were forced to land in the name of safety because of drones in the area potentially crashing into them. One particular incident involving the freeway connecting California to Las Vegas, prevented them from saving several cars as the fire jumped the highway. This can mean additional liability and even jail time due to the impediment of emergency services.4

Drones have become part of a landscape in the modern world. They have proven themselves useful for multiple uses such power and movie productions. Real Estate brokers have wanted to use this technology to assist in marketing and selling their property. But with all of the paperwork and restrictions, it might become very expensive to get the legal waivers, purchase the necessary insurance, hire the pilots and assume the liability. Even then, you run the risk of infringing on someone’s privacy or cause disruption to important services. Consult your attorney and your broker about the laws and insurance needs before attempting to use drones in your business.

*After reading some reader’s reactions and examining the sources closer, the height limit given was incorrect. It is not 200 feet but rather up to 500 based on current FAA regulations.

The above article is solely the opinion of this writer and does not constitute legal advice. Consult your attorney before making any decisions.