Seeing the trend in other states, Virginia has become the 16th state to pass a cannabis legalization bill in their legislature.

Virginia this week passed HB 2322 in both houses, 48 to 43 in their House and 20 to 19 in their Senate and has now brought it to Governor Ralph Nortam who has signaled his support for the bill. “The law would also allow possession of up to an ounce by anyone over 21 and establishes a state agency to oversee regulation of the cannabis market. The bill (also) calls for 30% of marijuana tax revenue to go to a fund aimed at communities historically over-policed for marijuana-related crimes. Under the legislation, people under the age of 21 would face a $25 civil penalty and have to undergo treatment.”[1]

Critics have pointed to the lack of legal consequences in the bill now. The legislature had decided to wait until the next legislative term to discuss criminal regulations. In addition, there is some concerns that it would lead into more discrimination, an issue that was prevalent during the War on Drugs. In a twitter post by the Virginia chapter of the ACLU, "Lawmakers paid lip service to the communities that have suffered decades of harm caused by the racist War on Drugs with legislation that falls short of equitable reform and delays justice.”

Virginia’s passing of the bill means that more and more states are open to the idea of a cannabis marketplace. However, with no legal framework in place it will be difficult to police it effectively. Whenever you do business relating to cannabis always check the laws on the books for each state before setting up a policy. 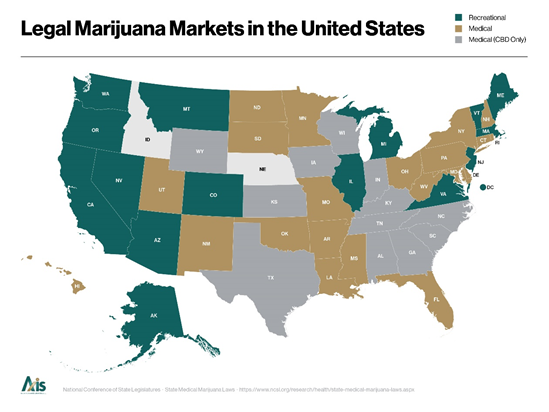