What to do About Crowdfunding 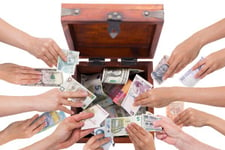 In the last year and a half, a new wave of investment has become popular with start-ups and private firms. Instead of going after big investors, start-ups are looking towards individual consumers to fund them. Using the crowdfunding platform, a start-up company can appeal to the average consumer, rather than a qualified investor. Once they reach a certain amount, they can easily file with the SEC and become public. It’s all thanks to the relaxation of the rules through the use of social media and other non-traditional means under the JOBS act.1

The JOBS Act or Jumpstart Our Business Start-ups, is an act signed into law by President Obama in 2012. It was signed in response to the difficulty that start-ups were having in getting funding and to alleviate of the cost of business. With the country still in recession at the time and businesses struggling to obtain capital, it was originally designed to simplify the path to going public. Unfortunately, with the lack of capital, the number of companies closing down their business far outstrips those opening, number not seen in 30 years. There were only 2.1 percent of companies going public in 2012 compared to the over 3 percent and it’s these companies that are expected to drive job growth.2

Enter Title 3 of the JOBS act. It essentially allows for non-accredited investors to contribute up to a combined one million dollars over a period of 12 months. It also provided rules that had to be disclosed to the SEC and the individual investors. Among the needed information is whether or not you have Directors or Officers, or people with an over 20% stake in the company. Their tax records and their financial condition from the last year are required as well. These are normal in an IPO but they are now simplified for start-up under the JOBS Act. Crowdfunding as a source of capital is increasing in popularity. Instead of trying to get large amounts of capital at once, they can rely on thousands of smaller investors thanks to the JOBS Act rules as it relates to start-ups.

Insuring crowdfunding companies can be difficult. Because anyone can fund the project and most of the investors cannot be held liable. There are often no credible or financially significant investors. Additionally, since there are fewer checks and balances by regulatory authorities, there is a greater potential for fraud in these types of companies. There are several significant insurance issues associated with Crowdfunding a start-up organization.

To help address these risks, a proper D&O and E&O insurance policy can help protect both companies and investors.3

Crowdfunding is the new way for people to get behind a company and for companies to finance start-up operations. Before you begin crowdfunding, check with your attorneys about the risks involved and check the rules of it as it may potentially differ from state to state. Before using the service, consult your attorney about the goals you want to meet and have a properly structured D&O and general liability in place.