Workplace Violence: Some Numbers to Consider When Adapting Safety Procedures 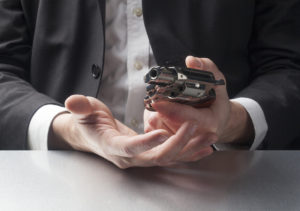 The scariest thing that could happen in any work environment is for someone with a weapon, such as a knife or a gun, to come in and attack your coworkers. This is especially concerning if it’s someone you work with or formerly worked with. Many companies don’t properly assess this risk.

There are many myths surrounding the signs and warnings that frequently could tip someone off that a person needs help. Things like ‘It happened out of the blue’, ‘He just snapped,’ ‘It’s spontaneous and unpredictable.’ In reality, violent incidents could have been brewing for a long time. Signs like workplace bullying or comments that might show more violent fantasies and even erratic behavior, should tip employees and employers that an employee might have serious issues that may need to be addressed.

Many factors can contribute to an employee turning violent. Some internal signs include a stressful environment at work and having a conflict with a co-worker. Externally, domestic violence being exposed to a radical ideology can influence an employee or an ex-employee’s violent tendencies. Seeing the warning signs early might mitigate potential problems.

Some might think that workplace violence is random, similar to a terror attack. But more often than not, these incidents happen internally and brew for some time before they occur. According to a published report by Hiscox, there are two classifications when it comes to active shooters and other workplace violence; those open to pedestrian traffic and those that aren’t. For stores open to pedestrian traffic, like retail stores, 73% of the incidents occurred from those came into the store. But for businesses that don’t normally open their offices to pedestrians, the numbers paint a disturbing picture:

An employer has an obligation to make their working environment safe. If an employee is acting suspicious or experiencing difficulties in dealing with certain issues, an employer has an obligation to address the issue, both to that employee and to other employees. This includes disciplinary action or even termination. There are multiple steps to take to insure your office’s security. Your office should be locked to those who don’t work there, cameras should be installed, and the locks or door codes should be changed every time an employee leaves the company. Speak to troubled employees if something has been bothering them or has shown signs of sudden personality changes. In the event of a violent incident, having a workplace violence policy can assist a company in dealing with the aftermath.