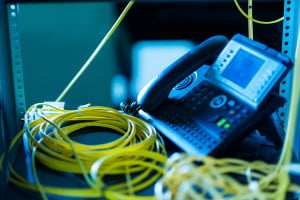 Privacy and cyber coverage seems to be on everyone’s minds these days. One emerging cyber threat relates to the hacking of a company’s telephone system. Hackers try their hardest to break into your personal data, your company’s finances or even try to steal your identity. But what many don’t realize is that there are other ways hackers and thieves can breach your companies’ systems. One of them is the least likely of suspects, your landline phones. One of your biggest portals to your clients and beyond is just as vulnerable to hackers as your online accounts, computers and mobile devices.

The way these hackers get through to your phone lines are quite ingenious. Most companies have in house phone lines. These lines are used to connect to other departments within the actual building. However, most have either IP phones or IP portals in their phone systems. These portals provide vulnerability to online cyber thieves. It is possible to hack into these phone lines and then use them in fraudulent ways.

One of our client’s phone systems was recently hacked. The hackers opened up a line to a terrorist state and incurred $30,000 in charges over one weekend. Their phone company shut off their lines until they paid the money.

It is not just businesses that have to be worried about potential telephone fraud. Personal numbers are just as vulnerable and are more likely to be breached than businesses. Cyber thieves can use your number to rack up bills in your name. In Britain, a woman received a phone call with the number 0843. She hung up within a second. When she received her bill, she was dismayed to discover that she had racked up a 300 Pound bill thanks to what amounted to a 12 hour call. The hackers had hacked the numbers, set a very high fee and then when the bill came, the telephone company, Vodafone, passed a portion of the profits to them. This was part of the 23 million pounds that the public lost to fraudsters this year in this type of scam.1

Telephones are and have been one of the many powerful tools people used in business. Hackers know this and use this to make calls through your phone lines. They also can disguise themselves as your bank and your tax office to steal your money through legitimate means. Even answering the phone can potentially give them a means to create a massive bill. After such a call, be sure to check with your various financial institutions to ensure the calls are real. Change your IP passwords for your phone systems frequently. Hackers find new ways every day to make money, don’t give it to them.